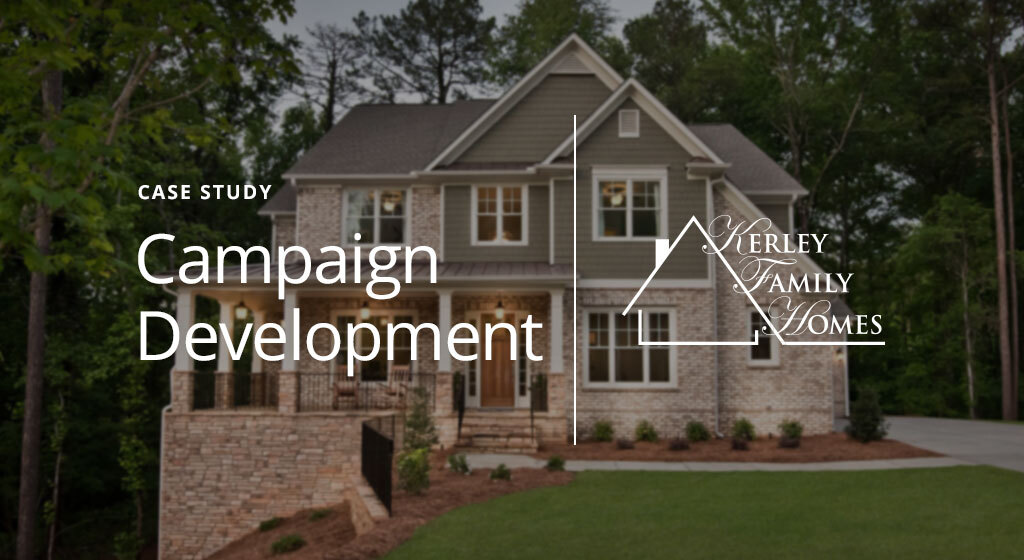 As they were moving into the new year, nationally recognized and award-winning homebuilder Kerley Family Homes needed a campaign that would capture attention and move 2019’s remaining inventory. An existing campaign, centered around hosting the holidays in a Kerley Family Home, was on the way out and we identified it as the perfect opportunity to transition to something new and refined.

In the weeks leading up to the holiday break, Rearview Advertising came together to discuss possibilities for a new campaign in Q1. Members of the design team, SEM team, and even the partners joined the conversation. We spent a significant amount of time in the meeting room deliberating on themes, visuals, copy, and overall style. Of course, “20/20 vision” came up as a possibility, but brands were already piling on that imagery and we knew it had no staying power.

We worked to develop a campaign that acknowledged the new year and was still uniquely “Kerley” to match their promotion. “In 2020, It’s All About Value” was our final decision – simple, with a strong callback to the company tagline. It was chosen to strengthen the core message of the brand in the turning of the decade. When the tagline was finalized and handed over to design, some of Kerley’s existing collateral came back into play. Tying together visual elements such as the keyring image from the successful “Own Your Future” campaign, classic Kerley touches, and just enough seasonality made this a standout, visually and conceptually – the perfect welcome to 2020.

Propelled by a flexible campaign, Kerley’s Q1 efforts were well-rewarded. Their new campaign carried them all the way into Q2, pushing sales past 75% of the inventory listed in their promotion. Their new campaign was updated with seasonally appropriate graphics after the streamers of New Year’s Eve lost their sparkle. Rearview maintains an up-to-date catalogue of listings covered under the promo on Kerley’s site, and continues to provide graphics for support as the campaign winds down.

Campaign Development Expertise at Your Fingertips

Developing a coordinated, appealing campaign requires input from a variety of departments. Getting a marketing team together with the experience to create an effective one is a huge undertaking, both in time and money. Save yourself the trouble – call Rearview and you’ll have a fully-trained, well-organized campaign development team ready to work with you. Come learn more about how we level up digital marketing for all of our clients.

If You’ve Got It, Gram It | Instagram Stories for Brands

Keep Them Coming Back: Website Design for Repeat Visitors