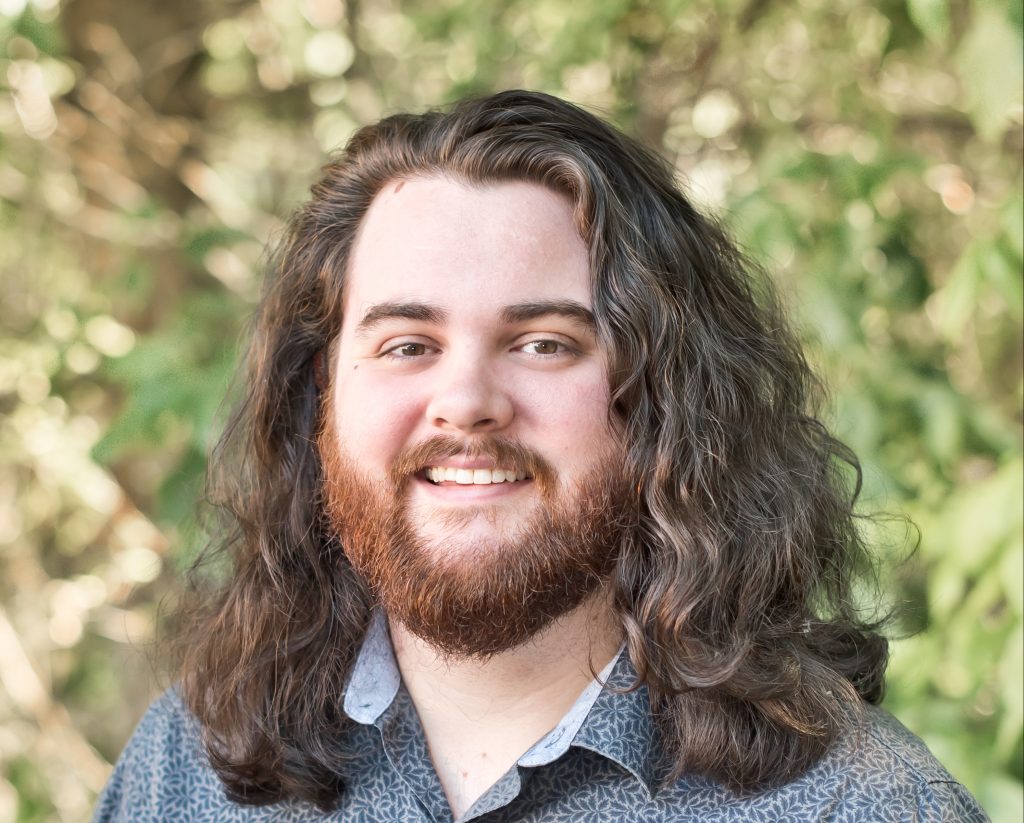 We are excited to have Digital Content Specialist, Jake Gentry, join us as a new member of the Rearview Advertising team!

Jake studied Communication at Clayton State University in Morrow. There he wrote for school paper The Bent Tree and helped the theatre department establish a social media presence. After college, his calming demeanor was fired in the kiln of holiday-season Amazon customer service, which he describes as a fun and enlightening experience. Soon after the season ended, he had the opportunity to work as a staff writer for Kitchen Drawer, a local magazine in Griffin, Georgia. Their parent company also owned a small marketing agency, and he earned his chops running social media and crafting ad copy there.

Jake loves the unique opportunity for expression that digital writing creates. Used correctly, he believes it sets the tone for what could be a company’s only interaction with members of their target market. As our Digital Content Specialist, he writes blogs and other pieces of copy for our clients and maintains several client social media accounts.

We asked Jake about a few of his favorite things outside of the office, too. Read more about our creative new employee:

SoundCloud. Everyone gets tired of the same music over and over and over. I love the opportunity to hear new songs, totally unknown artists, and emerging genres. The best part, it’s free! You can stream as much as you want, make playlists, and you only have to hear a few ads.

Slices Pizzeria in Griffin. Every time I’m down there I pick up a slice. Crust thickness, sauce, toppings, char, everything about their pizza is just right.

A Scanner Darkly by Richard Linklater. It’s based on the novel of the same name by Phillip K. Dick. The studio took a risk rotoscoping the entire movie, but the animation came out great! The bleak, lived-in near-future aesthetic was spot on, and the dreamy look and pace of the movie emphasize its nightmarish theme of the total loss of self. It’s a gorgeous film and a really cool exploration of the medium.

No Reservations. Anthony Bourdain was no-nonsense, deeply worldly, and really gentle where it counted. The show illustrated unique cultural differences, which are great reasons to travel, but it also revealed how much people everywhere share more things in common.

I really love cats, but it’s gotta be dogs. They don’t have nearly the impact on the local ecosystem that a cat does 🙁

Roboto – it’s a sans-serif typeface with a serif sibling in Roboto Slab. I love this typeface because it’s unassumingly attractive and reads fairly well. I’ve found that I can put it on almost anything. I also love it because it’s available under an Apache open source license, so it’s free for anyone to download and use, modify, and redistribute with little complication.

Twitter. It can be a monstrous beast of a platform, but it’s a powerful connector of creators to their fans and a host to some thriving online communities. There are plenty of brand interaction opportunities on Twitter, too, and those are eminently shareable.

Android. It’s Linux based, yet it works right out of the box. It’s as close as an open source operating system has come to mainstream acceptance. That said, it’s not exactly open source either, not in the forms most users are familiar with. I’m just glad that it allows small manufacturers like Fairphone, Monohm, and others to design creative alternatives to standard mass-market smartphones, and for other creators to have a stable, familiar base to work off of.

A name-your-price game bundle. There are way too many games out there to play, and plenty of good stuff goes up on sale.

You want better leads – that is, you want leads that are more likely to convert. Long tail keywords can get you there. Used correctly, they can increase your impact even further – giving you a better ROI on what’s likely one of your biggest marketing budget items (with even... Read More

3 Local SEO Services You’ve Heard About, and Some you Haven’t

SEO requires a number of tools and techniques for a proper ROI. Some of them are obvious – wanna rank on Google? Play nice with their business listings. But don’t you want something a little more advanced? Read on and see our tips for a few local SEO services you’ve... Read More

Email marketing takes a gentle touch – and it’s not set-it-and-forget-it simple, either. Here are some mistakes you may be making with your email marketing, and the simple ways you can avoid them. Letting Sign-ups Pass you By Your site is a treasure trove of interest. If you have forms... Read More